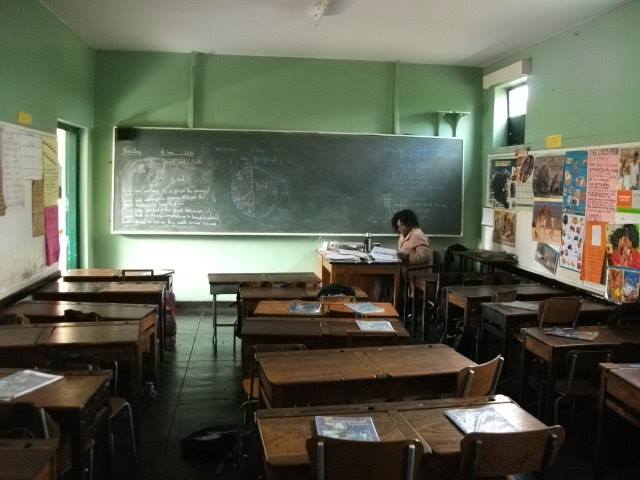 I’ve not quite waded into the dichotomous debates about traditional v progressive that are all over the blogosphere at the moment. I think I don’t hold fixed views yet. When everything was too progressive, it irritated the hell out of me and I wanted to throw my spelling rules in the faces of leaders who gave the impression I was committing a crime by teaching in that way. I’m still annoyed by the entrenched attitudes towards the teaching of maths in primary school, but that’s a whole other story. Now I’m starting to feel the need to defend some progressive ideas against the onslaught and oversimplification that I see, but I’m resisting getting involved because I’m not attached enough. I think there is a middle way that works and has done for a long time.

But there is one thing that I’m very sure of. School desks with flip top lids. I wish they had never thrown them away (I couldn’t rescue all of them!) and I want them back! I know they made a noise when they were slammed. I know they could be hidden behind for a quick gossip. I know they could harbour any number of mouldering cheese sandwiches. But for me, they worked. I long for the days when pupils could put work away, take books out or clear their desks in one easy action. Now we have banks of trays which take up room and are conducive to disturbances when swapping resources, and we have bookcases dedicated just to holding pupil exercise books, which could be much better used for something else. Modern furniture in schools is awful or expensive – sometimes both.

That’s a not too ancient picture of my old school, by the way! It hasn’t changed at all since I was there in the 70s. It’s still one of the best primary schools in the city, perhaps the country.

This should go out with all reports, I think.

Ramblings of a Teacher

When you receive your child’s report this year, things might not look as clear as they once did. Having spent years getting your head around levels and sub-levels, I’m afraid they are no more. And as much as this might come as a shock to you, believe me, we as a profession were no more prepared for it.

It comes at a time when – as you’ll know – so much else has changed in our schools. Teachers the length and the breadth of the country have been doing our utmost to provide the smoothest and most effective transition for your child as we move from one national curriculum to another, but it hasn’t been easy.

It means that when you receive the report on the attainment of your child at the end of this academic year, the picture may look very different from the past. Children who were comfortably…

I teach the school band on a Friday, after school. I have done for about 20 years. It started out as an antidote to the stifling ‘orchestra’ that was causing children to give up their music lessons. The orchestra focussed on very simple arrangements of chamber music, welcomed mainly violinists, and at a push some woodwind. Brass could get lost and join a ‘wind band’ somewhere. It haemorrhaged members and I picked them up. All comers were welcome if they knew which way up the instrument was. We’ve always had a rhythm section with drummer, bass, guitars, keyboards and then a random assortment of instruments, including, at times, djembes, steel pans, saxophones. Every year we lose our ‘seasoned’ players to secondary school. We play 2 or three gigs a year and we’re pretty good for a primary school! I think we’re the only one of our kind in the county.

So what’s this all about? Well I was thinking about it this Friday. I have no external objectives; I have no classroom observations by ‘senior leaders’; I have no written plans; I don’t have to fill in any boxes or record progress; I don’t have to give a percentage of pupils ‘developing, meeting or exceeding’; I have no ‘accountability’ in that regard, whatsoever. In short, I can drive it myself without having to check to see if I’m doing it right according to some outside observer or objective. And yet, AMAZINGLY, we go from a rag tag bunch at the beginning of each year and by the end of the summer we’re playing rock and pop and a bit of jazz as a group. I’d claim that the ‘progress’ of each pupil is massively enhanced by the expectations of playing with the band. In other words I don’t need any external encouragement or censure. I do not need to demonstrate anything to anyone and I still work hard to get quality out of my students. Which is what I’d do in the classroom, too, if I could, without having to ‘check the speedo’ all the time to see if I’m following some external, arbitrary set of conventions and directives.

Not unrelated to this is a growing feeling that nobody has come up with anything useful since teaching began. I’ve been immersed in educational research for the past 5 years and the more I find out, the more I see that there is nothing conclusive at all. Pet theories abound, citing ‘impact weightings’ but on closer inspection, the evidence disappears in a puff of unreliable smokescreen. We’ve had a variety of memes inexpertly thrust at us through local ‘experts’, including, off the top of my head, AfL, exploratory learning, child-centred learning, reverse planning, the creative curriculum, back to basics, real books, key words, phonics, Building Learning Power, hydration, learning styles, literacy and numeracy ‘hours’, mixed ability, ability grouping, interventions… ok I realise that’s a completely mixed bag, but when I pick out anything meaningful from any of that, I’m left with the realisation that there was nothing revolutionary there. Anything useful was practised decades ago by my own teachers all through my education and I’m doubtful that the rest of the profession was full of crap teachers for the want of some external directive and earth-shattering research finding.

Teachers are so drilled into doing what they’re told, that we’re now tying ourselves up in knots to please whoever we perceive is going to judge us, by whatever measure, be it our own school leaders, OFSTED or some imaginary ‘them’ that is telling us we now have to do ‘this’. It’s stultifying. I’ve watched many new practitioners over the years and their journey has two paths – lose all initiative and become another stressed-out drone, or leave. The latter have often been those with the most to offer.

Lately I’ve gone back to my own basics: teach by showing how or what; let the pupils do it themselves; modify, practise, move on. It seems to work. I don’t know about the research evidence.